Fr. George Couturier hails from the great City of Hartford. He was born into hearty French stock in 1954 with loving and nurturing parents, Yvette and Fernand, who came from Northern Maine, and an equally loving sister, Lucy. Father was educated in the public elementary schools of Hartford, and then attended secondary school at South Catholic High School, Class of 1973. His undergraduate education took him to Saint Thomas Seminary (A.A.) and the University of Hartford (B.A.), studying philosophy and sociology. His priestly formation took place at Saint Mary Seminary and University, Baltimore, where he received a Master of Divinity degree. A few years after his ordination in 1981, he returned to graduate school studying simultaneously at the University of Hartford receiving a Master of Education and Administration and at Saint Joseph College (now University of Saint Joseph) receiving a 6th year degree in Pastoral Ministry, both conferred in 1989. Since his ordination, Father has been assigned to a wide variety of ministries within the Archdiocese of Hartford. He served as parochial vicar in several parishes such as Holy Family, Enfield, and Saint Matthew, Forestville. He had roles of chaplain and administrator at South Catholic High School, Northwest Catholic High School, and most recently, at East Catholic High School. For several years, Father was Dean of Students and faculty member at Saint Thomas Seminary, Bloomfield, and later chaplain at Central Connecticut State University. For 12 years he coordinated the Archdiocesan Office for the Restructuring of Parishes as well serving as Assistant to the Vicar for Priests Personnel and chaplain to the Deacon Office. He has been pastor at Saint Ann, Milford (co-pastor), Saint Mary, Newington, Saint Dunstan, Glastonbury and most recently Saint Mary, Branford. 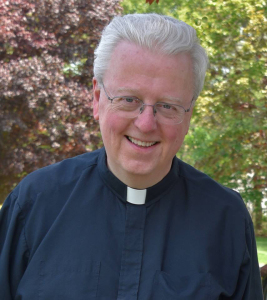